As described before, four-probe measurement works by contacting four equally-spaced probes to a conductive surface. Between probe 1 and 4 a current is applied. Then the voltage between probe 2 and 3 drops and is measured. With the known values for U and I, the sheet resistance can be calculated.

The unit Ω is the mathematically correct one, but to make a distinction to the bulk resistance the unit Ω/□ or also "ohm per square" is used.

If the thickness and sheet resistance of the measured material known, the resistivity can be calculated with:

Four measuring probes with the same spacing are placed in a row on the surface, with a known current flowing between the two outer ones and the potential difference, i.e. the electrical voltage between these probes, being measured using the two inner probes. Since the method is based on the principle of four-wire measurement, it is largely independent of the contact resistance between the measuring tips and the surface (Thomson bridge principle). The closer the tips come to the edge of the sample, the more the measurement is distorted: the electric current lines cannot propagate freely, they must flow parallel to the edge of the sample. 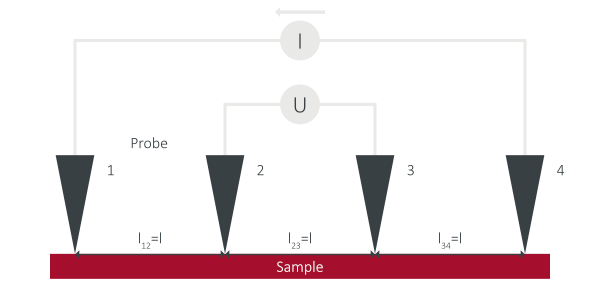 If adjacent measuring probes each have the same distance, the sheet resistance R□ is obtained from the measured voltage U and current I with:

When the current is set to 4.53 mA, the resistivity is simply the voltage reading in mV.

However, this formula is only valid in the ideal case of a very thin (compared to the probes distance), infinitely extended surface with homogeneous resistance behavior.

Four-point measurements are used, for example, in semiconductor technology to determine the sheet resistance of a layer deposited on the semiconductor, but in the process the layer can be damaged by the measuring tips.

A method to measure the resistance or sheet resistance without using a sensor array with equal distance is the van der Pauw Method. 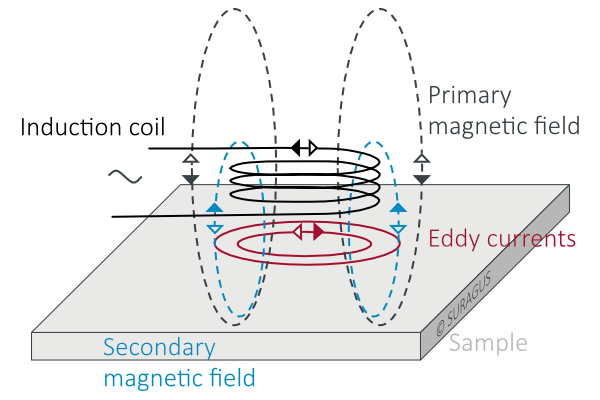 Again, the sheet resistance is the result of dividing the resistivity (ρ) of a layer through the layers thickness (d).

If the current flows through the contacts into the layer under investigation with a uniform resistivity, then the current spreads out in a circle. The current density can be given by:

The current is induced at location r1 and drawn at location r4. This produces a typical dipole pattern. For the thin film approximation, the distance between the peaks must be much larger than the thickness of the thin film. Then the current density can be given by:

The electric field is:

The measured voltage between r2 und r3 is:

The voltage is independend of the path:

The voltage after integration is:

If the thickness of the layer is unknown, then the resistance cannot be calculated. In this case, the sheet resistance can be given by:

For layer thickness greater than half the probe spacing, the following formula can be used:

Using the voltage and current readings from the probe:

Contact and propagation resistance are very high when using two-point probes. This means that the resistance of the sample cannot be isolated. This is the advantage of the four-point method. The contact and propagation resistances of the voltage probes are very low, which makes the measurement accuracy very high. This is because two wires are used, one to induce the current and the other to measure the drop in voltage.The be clear: a two point probe measures the combined resistivity of the sample, the contact resistance and the probe resistance whereas a four-point probe only measures the sample resistivity. 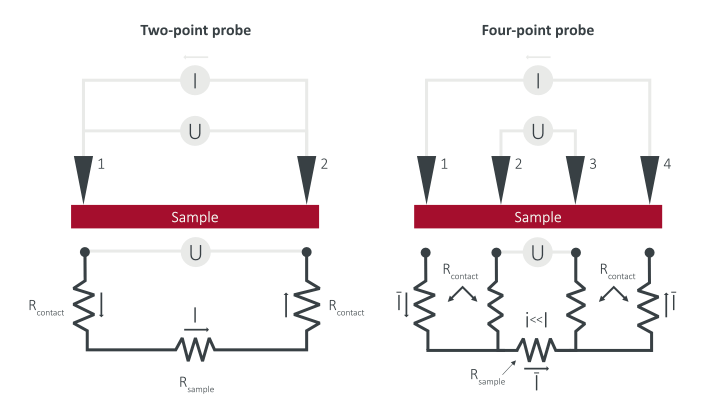 Four point probe measurement have to handle with a few problems:

Is there a difference in sheet resistance measured with 4PP or Eddy Current?

There is no difference in sheet resistance measured with 4PP or Eddy Current. Both testing methods measure the sheet resistance as a physical property. This property is independent from its measurement method.

What is the advantage of non-contact sheet resistance measurement over common four-point-probe devices?

Applying SURAGUS non-contact technology, there is no wear of needles / tips, which typically causes high replacement costs in common 4-point-probe mapping systems. A further significant advantage is the short measurement time: SURAGUS TF Series devices take only a few milliseconds for each measurement and no time for con­tacting the sample is needed.

This also allows to measure inline during production or “on the fly” in mapping systems. In result, the SURAGUS sheet resistance mapping systems measure thousands of positions in a couple of seconds. No interpolation between measurements points - as typical in 4-point-probe mapping systems – is required. In result defects and non-uniform areas are not missed.

Does roughness affect the measurement quality?

Is the system applicable to multilayer systems?

What is the measurement pitch / measuring point distance for inline or mapping solutions?

Inline measurements and mapping systems use a lateral measuring point distance of 250 microns to 10 mm (400 mil) depending on the application. The standard distance for property imaging is 1 mm.

What is the spot size of a system?

The sensitivity of the measurement system is highest in the center of the sensor and decreases towards the outside and then no longer contributes to the characterization. The high sensitive zone (HSZ) of sheet resistance measuring systems ranges from 5 to 25 mm depending on the setup. Some systems with 100 mm HSZ were realized for wide coverage in the past as well. This HSZ diameter is primarily defined by the distance to the sample and some sensor characteristics. Smaller distances and sheet resistances enable smaller measurement spot sizes.

Structure and defect monitoring systems utilize a HSZ from 0.5 to 5 mm. Additionally, differential sensors with very high sensitivities are used for the detection of local defects and variations.

What is the spatial resolution?

The spatial resolution is determined by the contrast of the measuring effect, the measurement point distance and the spot size. For example, a wafer mapping can be obtained using a distance (gap) of 2 mm. The high sensitive zone (HSZ) then has a diameter of about 5 mm. Sheet resistance fluctuations of 4% can be measured when affecting about 25% of the 5 mm HSZ. Defects that cause a higher contrast can be detected when affecting smaller areas. For instance, cracks with only a few microns width can be easily detected as the contrast and measurement effect is very high.

Do I need to change several sensors to cover a large measurement range?

The measurement range of one sensor covers 6 decades of sheet resistance. The required measurement range requested by the application is set during manufacturing of the device. There is no need for sensor changes or system adjustments.

Do I have to consider an "edge effect"?

The eddy current-based measurement relies on an induced electric current in conductive layers. The currents have a high current density below the sensor that diminishes with increasing distance to the sensor. This effect is also known from 4PP systems, which use the similar physics and cope with the same effect. Typically, there is a correction formula deepening on the distance to the edge in the user manual of 4PP and Eddy Current systems so the user can correct those measurements by multiplying a factor.

SURAGUS mapping devices provide an integrated and automated correction of this “edge effect” for many pre-configured sample sizes and allow an accurate measurement at any position of the sample.

Do vibrations of the sample have an influence on the measurement?